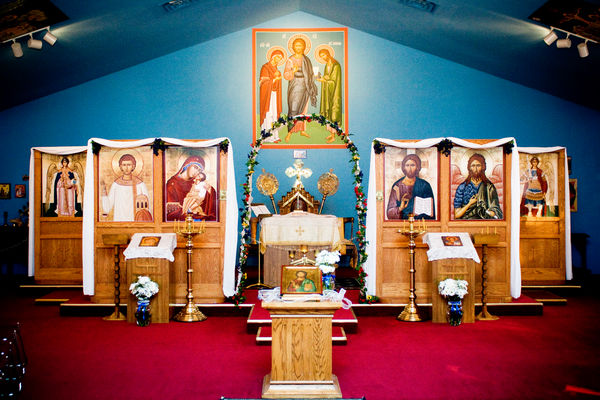 OUR HISTORY:
Lima is in the northwest quarter of the state of Ohio, between Dayton and Toledo on Interstate 75. The metropolitan area that centers on Lima has a population of over 155,000 people. In or near Lima are Ohio’s largest lake, the Neil Armstrong Space Museum, Ohio State University’s largest branch, Ohio Northern University, Lima Technical College, The University of Findlay, Northwestern College, Bluffton College, and Winebrenner Seminary. Lima’s cost of living and affordable housing provide an excellent place for families to establish roots. In February 1995, St. Paul the Apostle Church sent over 150 letters throughout the Lima area to gauge interest in starting an Orthodox Mission.

In November +1995, Fr. Daniel Rentel, Dean of Columbus Deanery, unexpectedly received an inquiry into Orthodoxy from the Lima area. In response, he encouraged contacts be pursued and Vesperal services be conducted.

A plan was quickly set up to meet people in homes, visit area campuses, meet area pastors, contact journalists, and to search for a fitting place to meet and worship. It quickly became clear that there was strong interest in an Orthodox Mission. Finding a place to meet, however, proved more difficult. Just as we were about to give up on meeting before Christmas, an area Episcopal priest introduced himself by saying, “I’ve been praying for an Orthodox Church in Lima for five years now.” His church rented its chapel area for our use. We immediately began planning our first “Advent” Vesper service and sending out invitation flyers.

On December 21st, +1995, thirty-four people gathered to worship at an Advent Vesperal service, held at Christ Episcopal Church in Lima. Most attendees were not Orthodox, but were interested seekers. There were also several Orthodox faithful, from Greek and O.C.A. backgrounds.

The Diocese of the Midwest funds for mission efforts allowed us to produce an introductory pamphlet, “For Our Visitors,” and an easy-to-follow Vespers booklet, with all music included, as well as to worship with beautiful icon prints of Christ the Light and the Mother of God and Child. With Vesper words and music in hand, nearly all attendees — Orthodox and visitors — sang out with joy. The personal interest and positive spirit which overflowed that evening was an appropriate beginning for the Orthodox Church in Lima.

A second, “Epiphany” Vespers was planned. Everyone who had expressed any interest was called. We also sent out Orthodox Icon Christmas cards and another invitation flyer. Unfortunately, the day before we were to serve Vespers, our facility became unavailable! We quickly arranged to meet in the Lima Civic Center. Maps were drawn up and people set in place to direct folks, who made it just fine. On January 4th, +1996, after one of the worst blizzards in area history, twenty-four people braved unbearable conditions to worship at that Epiphany Vesperal service.

From those services, a core group of dedicated seekers emerged. This group met at least weekly throughout 1996 for a thorough catechism, building relationships and learning never-before-heard Orthodox prayers. The Deanery-wide picnic was held in Lima. Fr. Gordon Walker spoke at the Lima Civic Center in August. Fr. Thomas Mueller, overseer of missions for the diocese, visited us in November. By December, Father Mark and Donna and their children (Joshua, Sarah, Elesha, Daniel and Caleb) moved to Lima and a full schedule of liturgical services were begun at the Lima Y.M.C.A.

In February +1997 we had our first baptism. In June and September of that year, two were Baptized into Christ and seven Chrismated with the Holy Spirit. By December we had outgrown the Y.M.C.A. and moved into our own rented facility, a small office suite in downtown Lima. In March +1998 we had another baptism, and in July another precious member was added through Holy Confession and ecclesial Marriage, as well as her two children were Baptized into Christ and His Church. September saw another two adults Chrismated into the Faith of the Apostles.

In January +1999 His Grace Bishop JOB granted us “Mission” status and named us “Saint Stephen the First Martyr.” By June of that year we found a larger facility, still in downtown Lima, where we worshipped. In April +2001, another was Baptized into Christ. We adopted August Second as our “Nameday,” the day St. Stephen’s relics were transferred, and we celebrate by blocking off our street and inviting all to karaoke singing, dancing, food, games, and fun.

St. Stephen’s is very active in community-wide events, such as “First Night” 1998 & 1999 activities on New Year’s Eve (giving brief “tours” of our church and selling ethnic pastries), and the Lima Christmas Tree Festival (covered with icons!). In February 1999 we were chosen as the “Church of the Week” at our local, popular Christian radio station. They broadcast our Divine Liturgy live, including the sermon inviting all listeners to “Come Home to True Worship.” The following week an abbreviated Matins service was broadcast each morning. St. Stephen’s often hosts visitations to two local nursing homes. Our annual Great Blessing of Waters at the Lima reservoir always a blessing.

God Himself is powerfully at work in Lima. In November +2000 we were honored to have Charles and Jane Omuroka, an Orthodox evangelist from Kenya, Africa, come to St. Stephen’s and share with us. His message was encouraging and inspiring.

In March of 2004 we were informed that the building we had been renting for four and a half years had been sold, and we had to vacate. One week after Pascha, we moved all we had to share a church building with a Lutheran group, and seven months later to a Disciples of Christ group’s chapel room. In our search for a place to pray, everything we found was either too small or way too expensive. We agreed on a temporary solution: to build a garage kit on a parishioner’s property, and use it for corporate prayer… then, almost miraculously, two small parcels of prime real estate were donated to us, so we would be able to worship on our own land! Our people worked hard and we raised funds to begin building a small, one-room chapel.

In November of 2005, we began worshipping at our new little church, with great thanksgiving to God! We are growing in our commitment to one another and to the Lord.